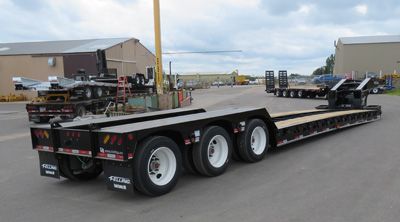 The old trailer, used approximately 10 times a year for the past 20 years, was replaced by a new model from Felling Trailers (www.felling.com). UFP recently spoke with Keith Millette, fleet supervisor for Minnkota Power Cooperative, and Laurie Engle, sales representative for Felling Trailers, who shared how they worked together on the spec’ing process.

Identifying Needs
Minnkota Power Cooperative’s fleet includes 106 trailers, more than half of which are units from Felling.

According to Millette, the cooperative decided to once again go with Felling for the new trailer because the fleet’s existing Felling units have proven to hold up against rugged use.

“When we do our annual trailer inspections year after year, Felling typically requires the least amount of repairs compared to other trailer manufacturers we use,” he said.

The spec’ing process for the detachable gooseneck semitrailer took about three weeks. Millette said the best place to start the process is to identify what you are hauling – its height, length, width and weight. That way, you can select the right tractor to pull the trailer, the right wet kit and so forth.

Millette also recommended collaborating with various departments within the utility organization to gather input on their expectations of the trailer.

“This is extremely important when ordering any trailer, especially when it’s 100,000-plus pounds of product going on top,” said Engle, who worked with Minnkota to configure the trailer build.

The detachable gooseneck trailer will primarily be used for hauling transformers weighing 85,000 to 100,000 pounds, but it will also serve as a multipurpose unit, transporting payloaders and forklifts as needed.

Communication is Key
Engle said the spec’ing process requires teamwork and a lot of communication via email and phone calls to ensure the equipment that will be going on the trailer will fit. Just designing the build can take three to four weeks, she noted.

Remember to be patient when spec’ing the trailer, Millette advised. He compared the trailer manufacturer’s spec sheet to the cooperative’s wants and needs, and then options were added and removed as needed.

“I used the base trailer spec sheet from Felling’s brochure for a detachable gooseneck trailer that was the closest to the weight I was going to carry,” he explained.

Millette also sent specs to Felling of what he was going to haul on the trailer.

“Felling Trailers doesn’t manufacture the mechanical deck. Keith [Millette] and myself, along with the engineering team here, went back and forth with the exact specs of what was going to be carried,” Engle said.

After spec’ing the trailer, the project moved on to Felling’s engineering department, she said.

“They worked on the 3D CAD drawings to get the correct strength in the beams, cross-members and other materials needed,” Engle explained. “Then the customer received all the drawings to go over and approve with his crew.”

Selecting the Correct Measurements
So, how did Millette help to ensure the trailer would be capable of carrying the heavy weights that would be hauled?

“We went off transformer footprints to ensure a trailer deck would be the proper size, have enough axles and haul without issues,” he said.

Millette also pointed out that the cooperative chose a hydraulic detachable gooseneck over the mechanical option because of the ease of detaching (i.e., it is more efficient for crews to attach and detach in rough, uneven and wet terrain).

According to Engle, “A hydraulic gooseneck is safer to use as the neck can be raised to allow the truck’s fifth wheel to attach without having to pick up the main deck in the process as you would with a mechanical gooseneck.”

Together, the cooperative and Felling also had to make sure that the height, when loaded, was low enough to ensure a transformer would be able to travel under overpasses. The hydraulic gooseneck can be raised or lowered to change the front deck height for ground clearance or overhead obstructions.

The result of the spec’ing process is an XF-110-3 HDG-L 55-ton hydraulic detach built to Minnkota’s specs and equipped with a booster/stinger to compensate for the needed load transfer when hauling transformers.

Additional features were incorporated for operator safety and ease of use, including strobe light/flasher kit safety lighting and a self-contained 11- to 13-horsepower hydraulic system with an electric start.

Millette said his crews are happy with the trailer’s ease of setup and operation.

About the Author: Grace Suizo has been covering the automotive fleet industry since 2007. She spent six years as an editor for five fleet publications and has written more than 100 articles geared toward both commercial and public sector fleets.

Minnkota’s XF-110-3 HDG-L Trailer Features
With the help of its longtime trailer manufacturer, Felling Trailers, Minnkota Power Cooperative was able to replace its 20-year-old unit with a gooseneck trailer built to its desired specs. The resulting XF-110-3 HDG-L trailer features: